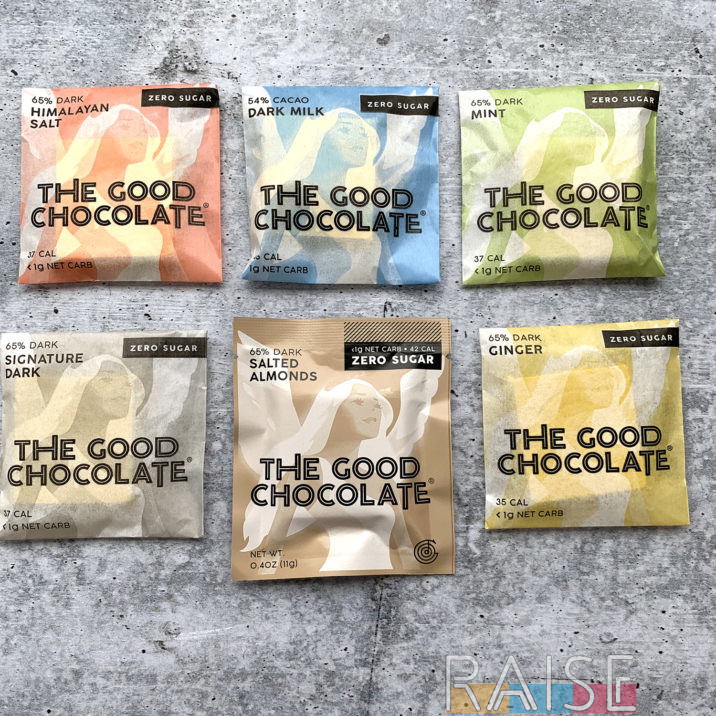 We recently had a birthday here, and the birthday kid asked for a piñata. Who doesn’t love a piñata? After saying yes, then I was stuck trying to figure out what to put inside of the piñata. Part of me was like… well…. it’s a birthday. Maybe I should just get conventional candy and let them eat one? The other part of me was like, NO! Don’t compromise on your values to fill a piñata.

After a lot of back and forth thought, asking the kids, considering non-food treats, and few other things; I finally decided to go with treats everyone could enjoy. The Good Chocolate was one of those treats. In case you’re wondering, not everyone can eat The Good Chocolate, so I made sure there was something special in the piñata for everyone. Now, on to the reviews.

The Papa: It’s not bad. (this is kind of a compliment coming from him)
Kid Three: It’s super creamy. It kind of tastes like watered down chocolate a little bit. The texture makes me think this is a good chocolate, but it doesn’t really taste like anything.
Kid Four: The texture is good. I like it… takes another bite… I like it!!

Interestingly, these chocolate squares look a bit like a soft chocolate that breaks easily (just giving my two cents whilst they hand out more samples.

The Papa: Again, it’s not bad. I could go either way, so far they’re both good.
Kid Three: I prefer this one over the first because it’s more rich, and it has less of a bad aftertaste. takes more bites… Yeah, I like this one waaaayyy better.
Kid Four: I like the other one better, but I do like this one as well.

The Papa: I’m pleased with all three that we’ve had. The bitterness of the dark chocolate is minimized. This is smoother than a traditional dark chocolate. As far as which I like the best so far, I don’t have a preference.
Kid Three: Didn’t sample (braces).
Kid Four: Her throat started to feel off with this flavor, so she took a break.

The Papa: He keeps giving me the same answer… Is this all from the same company? (I told him yes). I’m fine with it all. The company seems to be doing well.
Kid Three: This one is OK, but not the best. I still like the second one the best (Signature Dark)
Kid Four: Didn’t sample.

The Papa: (gave me a look that could kill) Tried a small piece… I think it’s pretty good.
Kid Three: Kudos to them. They actually kind of sweetened the ginger, but it does kind of burn my mouth. I think these aren’t chunks of ginger but maybe ginger snaps. but either way my mouth hurts.
Kid Four: (made an awful face even though she wasn’t even sampling)

In my opinion, it doesn’t smell super minty. Kid Three was convinced it smelled minty.

The Papa: It’s all good. All of the chocolates are… for no cane sugar, these are some of the best I’ve ever had. I wouldn’t have known there was no sugar if you hadn’t told me. I’d be OK eating these if you buy more.
Kid Three: It’s a little underwhelming. It’s not what i expected it to be. This kind of just tastes like mint milk. I mean, it is good, but just not as good as I’d hoped it would be. Overall, these are good and I’m impressed that there’s no cane sugar. While they don’t stand up to brands with cane sugar, they’re still very good. I’d be happy to eat the second one if you buy more.
Kid Four: Didn’t sample.

I’m not sure if I’ll purchase these again. It was pricey, which normally I’m OK with. However, I’m more OK with sweeteners such as maple, from a personal perspective. Erythritol can be corn derived (as well as derived from other produce). As a severe corn allergic, we try to keep as much corn out of the house as possible.

Their website doesn’t state if their using whole stevia leaf, the powder, or extract. If it’s whole leaf, then I’d be a lot more open to buying these again. I’m not OK giving the kids highly refined sugars of any kind, even if they’re not cane sugar.

As a treat, especially considering The Papa enjoyed these, they’re pretty cool. The Good Chocolate does contain dairy, so again, it won’t be the first thing I reach for at the grocery store. All-in-all, I’m glad the kids were able to try them, and that they come in cute piñata sizes.

I will add, they have a new vegan option. I’m going to put in a call and find out about the equipment to see if it would be good for Kid Two to sample.