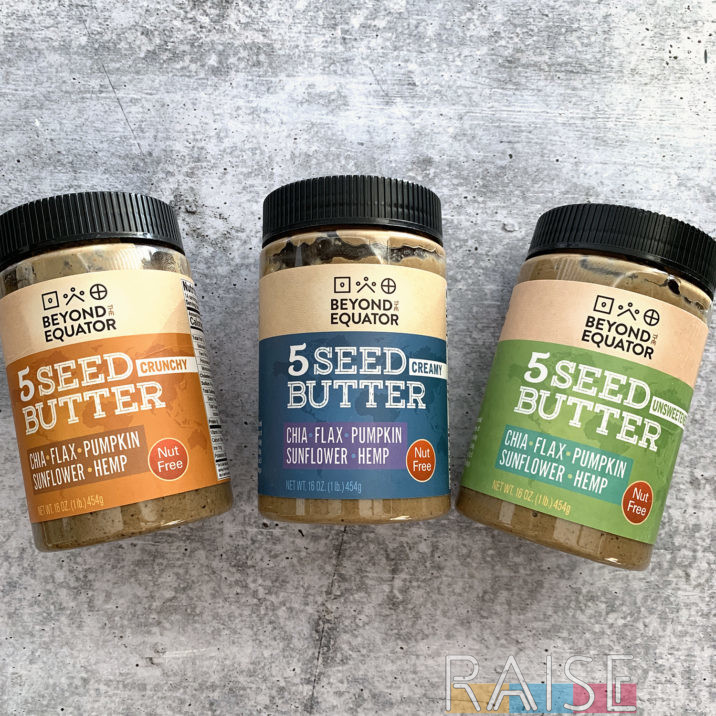 We recently teamed up with Beyond The Equator for a giveaway, and they sent us some of their spreads. I was so excited to have the kids try these because their products are top 8 allergy free, made in a top 8 free facility. That’s the unicorn around here 🙂

Kid Two: I don’t think it’s smooth like Kid Three. It’s kind of gritty, kind of bittter, and kinf od close to peanut butter.
Kid Three: It’s close to Sunbutter, except it really burns my mouth. Not like I’m eating a chilli pepper, but hot coals (Kid Four commented that he’s never had a chili pepper) He went on to say that it’s smooth like peanut butter. It’s bearable… I think I could eat it with jelly, but not by itself.
Kid Four: Ugggghhhh. I don’t like it… it’s bitter.

Kid Two: Hmmm. It’s sweeter than the first sample.
Kid Three: This is definitely sweeter. I like sweet it is, even though there’s only 1g of sugar per serving. It’s not bitter. I don’t like a lot of peanut butter options because they aren’t “sweet” and taste like nothing with a hint of peanut butter. Generally, I don’t mind this spread. I would eat standalone, on a spoon, or in a sandwich. I also like the texture. I really hope the crunchy one tastes even better.
Kid Four: I don’t like it. It tastes like ground up seeds (I laughed because that’s what it is). The seeds on Dave’s Killer Bread don’t taste like anything, unlike these seeds.

Beyond The Equator Crunchy Seed Spread

Kid Two: It tastes more salted, but also more bitter than the Creamy Spread.
Kid Three: It’s extra salty, and a tad bit more bitter. However, it has a good aftertaste that lingers. It doesn’t taste really good when you eat it, but afterwards it’s nice. I would totally eat this with jelly on a sandwich, but not standalone. And I totally wouldn’t eat the Unsweetened Spread… that’s my official ruling.
Kid Four: I don’t like it.

I guess I’m just happy they liked one of the options so I can support the company. I’ve also read that there’s a chocolate spread, so we’ll have to try that at some point. I asked Kid Four about her dislike, and it really boiled down to the overwhelming seed taste. It wasn’t for her.

I’m still rather excited about this product though. I think for people that need peanut and tree nut free options, made on free-from equipment, this is a fantastic product to add to the rotation. Looks like we’re up to a handful of these types of products 🙂